In the Ukraine, Khrushchev, himself a Ukrainian, did a highly commendable cleanup job -- even by Stalin's standards. 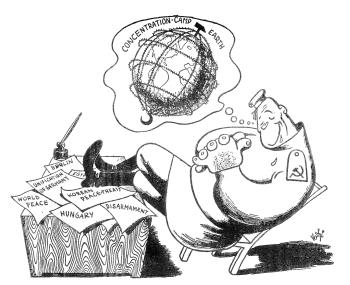 From time to time, the Soviets took time out to daydream about the ultimate goal -- all the people of the world peacefully and happily united under Communist rule. 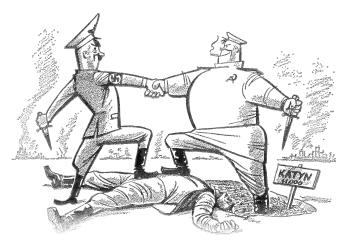 In 1939 a wonderful opportunity for world peace came from the most unexpected source. Although the Soviets opposed Fascist dictatorship and imperialiism, they saw a means which could be used to further the ultimate triumph of the Communist brand of Socialism. A mutual non-agression agreement was made with Hitler.

Hitler invaded Poland and the Soviets moved in to prevent the Nazis from taking over the whole country. The Societs murdered some 11,000 Polish officers and intellectuals at Katyn Forest and peace and order were established in Poland, for a while.

On to Page Nine!!