They developed industries in these countries and solved the problem of marketing by milking these industries of most of their products.

To show how thoroughly they honored treaties, in case anyone had any doubts, the Soviets threw a blockade around Berlin. the West responded to the Soviet whistle with the air-lift dance, and politely let the Soviets have complete control of the ground routes to Berlin. 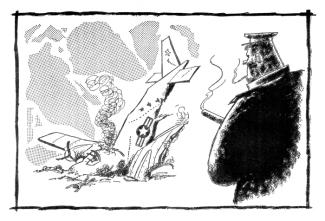 At about the same time, to underline their love for peace, the Soviets began to shoot down unarmed Western planes, which with obvious warmongering intentions happened to stray too close to Russian fighter planes. They decorated their brave fighter pilots with great fanfare.

On to Page Nineteen!!