To the north, Estonia, Latvia and Lithuania were enjoying freedom from the Russian yoke -- though their joy was frequently disturbed by nightmares.

The Soviets soon made those dreams come true. Since they were unacquanted with the Soviet way of life, Estonia, Latvia and Lithuania were given a concentrated course to catch up with it. 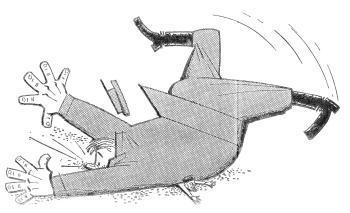 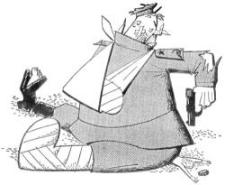 Now the "warlike" Finns started difficulties for the "peace-loving" Soviets. They were actually shooting back! The campaign was brought to a victorious close by the superior strategy and tactical knowledge of the Soviets.

The Soviets decided they would liberate only part of Finland. And ever since they have lived in friendly coexistence. 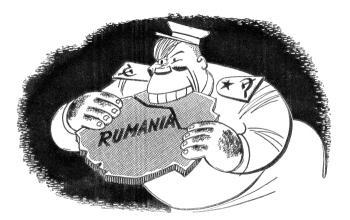 Since the Soviets had suceed so easily in adding territories with sometimes uneasy consent of their Nazi ally -- they took a modest bite of tasty Rumania. Then Bukovina and Bessarabia were annexed and incorporated into the Soviet Union, according to the wish of the people (in the Kremlin, that is).