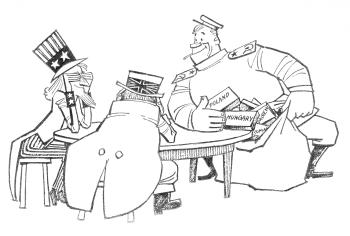 Then came the big Summit Conference -- Teheran, Moscow, Yalta and Potsdam. The Big Three came to settle the post-war world, but one player forgot the cards, and another forgot the chips. While they were looking for a new deck, Russia took the pot. 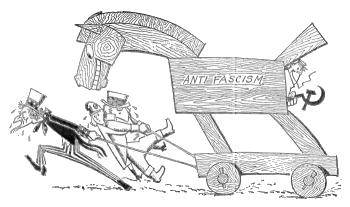 The Tehran, Yalta, and Potsdam conferences will long be remembered, for at them the foundation of the post-war world were pulled into place. It wasn't an easy accomplishment -- everyone had to pull together. 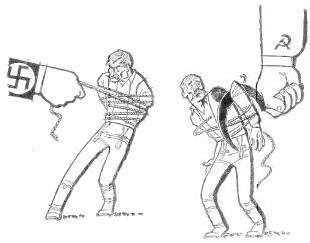 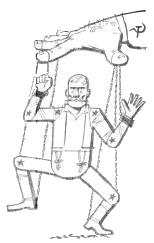 In 1945 the Soviets were finally allowed by the allies to win the war and liberate eastern Europe, cutting the ropes of Nazi slavery. The glorious Red Army liberated Poland, Czechoslovakia, Hungary, Rumania, Albania, Bulgaria, the eastern part of Germany and the eastern half of Austria. the Soviets have given these people full membership in the Soviet Empire with no strings attached.

On to Page Twelve!!