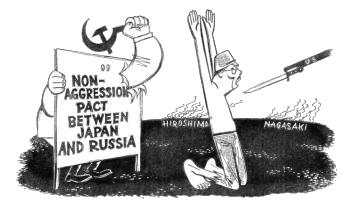 Russia had a non-aggression pact with Japan, which prevented most Japanese interference with shipments of supplies to Russia through the Pacific. This arrangement was so convenient that for two months in 1945 the Soviet Embassy in Tokyo concealed Japanese attempts to surrender.

But when the atomic bomb shattered Japanese resistance, there was no longer any need to honor some words written on a piece of paper. When Japan asked the Allies for surrender terms, Russia declared war on Japan, knowing that neutrals seldom get near the spoils. 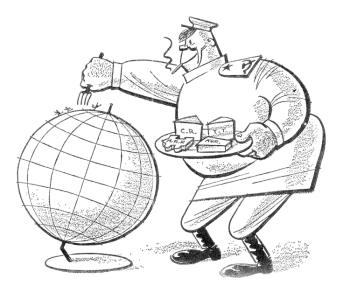 To even the loose ends in the after-war chaos, and to relieve some liberated countries from administrative burdens, the Soviets annexed Carpathian Ruthenia from Czechoslovokia; one tenth of Finland, the Republic of Tanna Tuva; the Manchurian railroads from China, Southern Sakhalin, the entire string of Kurile Islands from Japan, and Mongolia from China.

The heroic Red Army took every opportunity to spread culture and persuade the newly liberated peoples to give up immoral capitalism. Much was accomplished for when one begins to liberate, it's hard to stop.

On to Page Thirteen!!