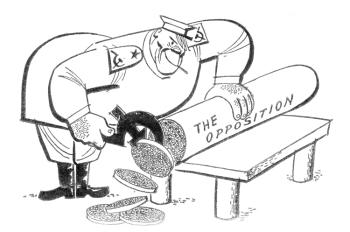 Peaceful coexistence (otherwise known as salami slicing) began between the Communists and their opposition.

Tiny particles (sometimes known as infiltrators) are put inside the salami. These particals operate from the inside, while the Communists work from the outside.

If the salami disappeared all at once its departure would be too obvious. Besides, a whole salami is usually just too much to swallow. But thin slices are easy to gulp down and few pay attention. Certainly even fewer will risk anything to save a single slice. So before long, the whole salami has been consumed and digested. 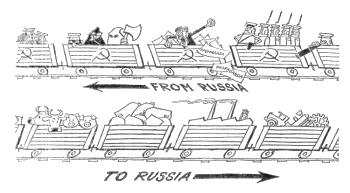 Peaceful coexistence has its economic side too. Vigorous import-export activities began immediately after liberation. Trains, loaded with goods and goodies, rolled back and forth between the Soviet Union and the countries, bringing the benefits of the great Soviet culture and civilization, and much needed economic aid. 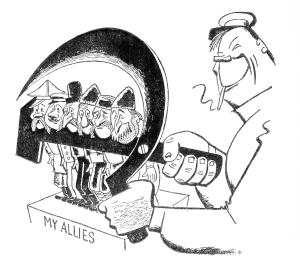 With all these methods the Soviets established a loyal and firm alliance, often referred to by the West as the "satellite system."

On to Page Fourteen!!