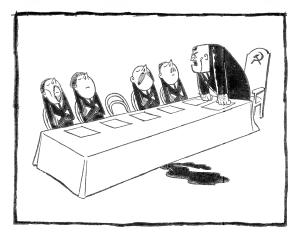 Occasionally, changes had to be made at home.

"I have to announce that Comrade Commissar has been relieved of his post -- for health reasons..." 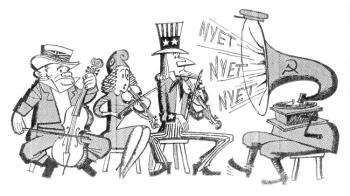 The Soviets had many conferences with the Western powers.

People thought the four would make beautiful music together. But the quartet could not get in harmony, with the record player repeating the old tune over and over again. 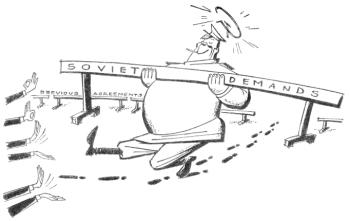 The conferences were gay occasions, full of cultural exchanges, during which the Soviets demonstrated their version of the "one-step." They would take ten steps forward on somebody's property. When too many complained, they pulled one step back, displaying a willingness to compromise. Amidst the great rejoicing. most were happy to forget the net gain of nine steps for the Soviets.

On to Page Fifteen!!