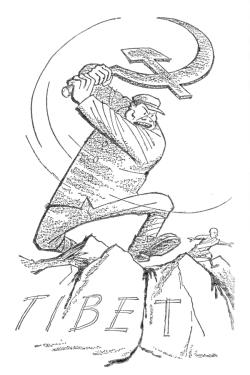 In the meantime, "foreign agents" provoked an "uprising" in Tibet as they had in Hungary in October, 1956. Red China responded and so did the free world. There was talk in the UN, but only the Dalai Lama cared enough about so small a slice of salami to make a move.

Red Chinese surveyors went to work on India's border and happened to step out of bounds. the indians excused the trespassing again and again until the big-booted Chinese convinced even nehru they meant to walk all over him. 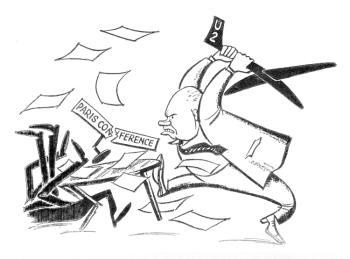 Russia wanted a Summit Meeting with the Western powers, or so it seemed. But when a Westerner named Powers dropped in unexpectantly, giving Khrushchev the excuses he needed, K. cried, "U-2," and claimed a foul. The Paris peace meeting blew H-bomb high.

On to Page Thirty Three!!